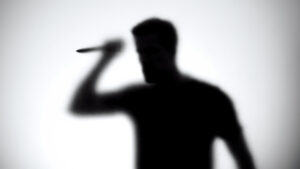 Silhouette of a man with knife standing behind glass wall, thriller

A recent report on crime in South Carolina paints a troubling mixed picture. Though violent crimes in the state have decreased over the past decade, the murder rate has shot up.

The 2018 Crime in South Carolina Book reports that murders increased by nearly 24 percent, from 317 in 2009 to 393 in 2018. What’s more, 61 percent of murder victims knew their killers, either as family members, intimate partners, business associates or general acquaintances. Victims and killers were confirmed strangers in only 10 percent of the murders reported.

The state report does not venture an explanation for this stark finding, but the statistics are related in part to South Carolina’s broad definition of murder: the killing of another person with “malice aforethought.” Unlike other states, South Carolina does not define murder as a premeditated taking of life. Any voluntary and deliberate act that results in death may be considered malicious, even if causing death was not the intention.

As a consequence, South Carolina murder or manslaughter convictions are often based on fatal episodes of violence between people who knew each other, sparked by family or personal disputes in which there may have been no contemplation that death would occur. Notably, the 2018 murder statistics do not include deaths caused by negligence, suicide, accident or justifiable homicide, which means that virtually any other voluntary act may meet the definition of murder. The takeaway message is that murder charges must be met by the strongest and best-prepared criminal defense possible.

Jack B. Swerling, Attorney at Law has handled thousands of criminal cases in South Carolina, working diligently to protect the rights of defendants and to achieve the most positive outcomes possible. If you or a loved one is in need of advice pertaining to murder defense or defense against other violent crime charges, call 800-701-0599 or contact us online to schedule your initial consultation at our Columbia office.