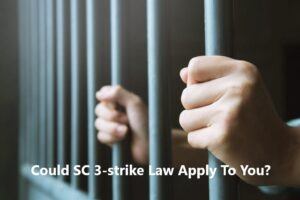 If you’ve been charged with a crime in South Carolina, it’s vital to understand the state’s sentencing scheme. South Carolina is one of the few states to have both a two-strikes and three-strikes law on the books, imposing particularly harsh punishments for repeat offenders.

How does the Three Strikes Law work?

South Carolina’s 3 Strike Law states that a defendant will be subject to a mandatory sentence of life in prison without the possibility of parole for a second or third criminal conviction of a serious offense, or a federal or out-of-state conviction for an offense consider “serious” by the state.

However, not all crimes count as “strikes” in terms of the two-strikes and three-strikes law. Offenses like breaking the speed limit or shoplifting would not be covered. The law only deals with crimes that fall within the categories of “most serious offense” and “serious offense.” The sentencing enhancements for these are as follows:

What is considered “serious” or “most serious” is not up to a judge or jury. The specific types of crimes that belong to each category are listed in the state’s criminal procedure laws.

What are Most Serious offences in South Carolina?

“Most serious” offenses include crimes that result in the death of another person, whether or not intended.  First and second degree criminal sexual misconduct and first-degree assault, arson, burglary, kidnapping and armed robbery are also among the “most serious” offenses.

What are Serious offences in South Carolina?

“Serious” offenses include but are not limited to assault and battery of a high and aggravated nature, second degree burglary, embezzlement of public funds, drug trafficking, insurance fraud and first-degree domestic violence.

Based in Columbia, South Carolina, Jack B. Swerling, Attorney at Law defends individuals in danger of spending life in prison because of the two-strikes or three-strikes law. Mr. Swerling delivers aggressive and strategic defenses in all criminal cases. To schedule your free initial consultation, call 800-701-0599 or contact us online.